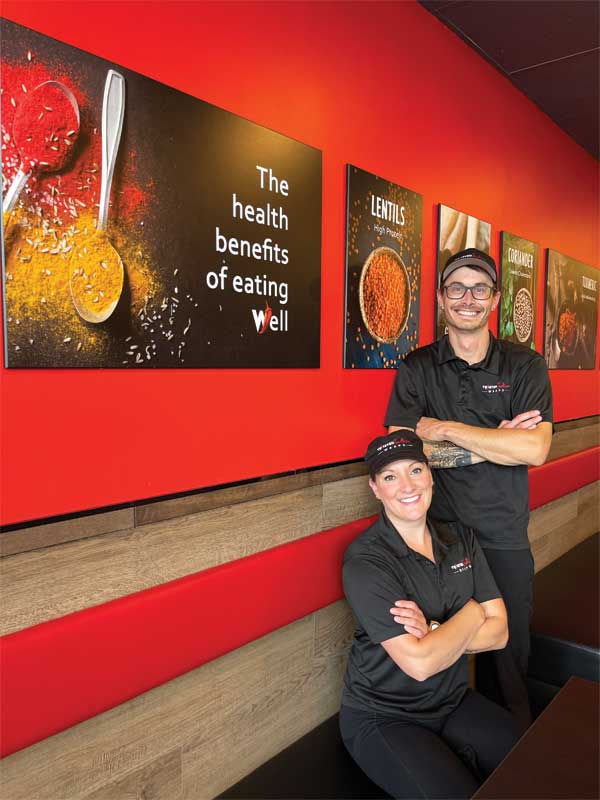 Opening a franchise is a big step and a challenge, but opening one just months before the biggest pandemic to hit the world in a century is a whole different story.

We recently spoke to Nick Knox, a Twisted Indian Wraps franchisee, about his journey from operating a crane in Barrie, Ontario, to opening a location in one of the summer hotspots. the most popular in the province.

Canadian commercial franchise: Tell us a bit About you.

Nick Knox (NK): I was born and raised in Collingwood, Ontario and went to CCI (Collingwood Collegiate Institute) where I took the culinary program for two years. This program was all about the basics and had nothing to do with Indian cooking.

While still in school, I decided to open a hot dog cart in Collingwood. My first location opened in 2007. Then in 2008, I had a second location followed by a concession trailer at the end of that same season. I ran the hot dog and fresh cut fries business for seven years.

In the meantime, I also graduated from Georgian College through the Police Foundations program. At that time, I was also very interested in construction, more specifically in driving a crane. I ended up selling my three locations, didn’t use my police degree and instead started training as a crane operator in Barrie, Ontario. The experience and skills I gained over the five years of building it were great, but I always missed the joy and happiness of cooking and customer service. At that time, I wanted to see what my options were. I asked myself, “Am I getting back into fast food myself or am I studying franchising?”

FCB: What attracted you to the franchise and Twisted Indian Wraps in particular?

NK: I never thought I would own a franchise to be honest. I’ve always been a driven person who loved creating my own menu options, designs, and anything related to the fast food industry.

However, in 2018 and 2019, I ended up going to a franchise show in Toronto. The second year was when I was going to open something but I didn’t know exactly what. At first I was leaning towards a different franchise, until I saw Twisted Indian Wraps on the show, and my decision was made – it was a business for me.

I arranged a meeting with Twisted Indian Wraps, and they showed me how the concept worked. It was 2019 when I first met Andy and Priya (the founders of the company) at the Park Place location in Barrie. I saw the company restaurant and tried several samples of their food. I realized that you can have delicious Indian food and have it served quickly, and I was convinced.

FCB: Can you tell us a bit more about the process of opening your first store?

NK: When I opened the franchise in December 2019, it was a scary time. I invested all my hard-earned money in a new concept, which was not really established like several other franchise concepts on the market. Also, it was Indian food in Wasaga Beach, and as we all know December is winter and winter in Wasaga Beach is a slow season. So, there were quite a few factors that made it a bit scary at first. All I did was trust the brand, the quality of the food and realized it was a new franchise. My guests were trying the food for the first time, but it was love at first bite.

FCB: What impact has the COVID-19 pandemic had on your franchise?

NK: COVID-19 arrived three to four months after opening and it was very unexpected. I never thought this would happen, especially right after opening a new restaurant. I ended up closing for six weeks due to COVID-19. I then reopened for a week to close for another week. So my restaurant was closed for a total of seven weeks during the pandemic.

Did it affect us? It’s hard to say. We still haven’t had a solid year of sales to build on. I have a very good location at Wasaga Beach. We get a lot of traffic from cabins, beachgoers and locals.

Once we reopened the restaurant it was for take out only. In our case, we could still bring our guests into the store and order their meals to go. This was one of the big advantages of Twisted Indian Wraps, like many other restaurants, you could only order online or over the phone.

Once COVID-19 hit, there was no shortage of help from the franchisor. Andy and Priya have been amazing since day one and once the pandemic hit they were always able to help. Reduced or no royalties, help with PPE, and updates on different government programs are some of the areas where they have helped me through these crazy and confusing times.

FCB: What thoughts would you share with anyone considering getting into the franchise? Besides, what does the future hold for you?

NK: I would tell anyone looking to own a Twisted Indian Wraps franchise to stay positive and remember this is a new concept so it will take time to prove itself. Even some of the most popular concepts take time when entering a new market. Trust the brand and yourself. As for me, I intend to open a second branch, in Collingwood, Ontario, or in Blue Mountain. Some things have happened this year and I might even go to Orillia as well. I love the Twisted Indian Wraps concept, food and branding. To anyone who wants to open one, believe in yourself and the brand, and you will succeed.

Use personalized videos to amplify sales

Hassan Khosrowshahi inducted into the Canadian Business Hall of Fame