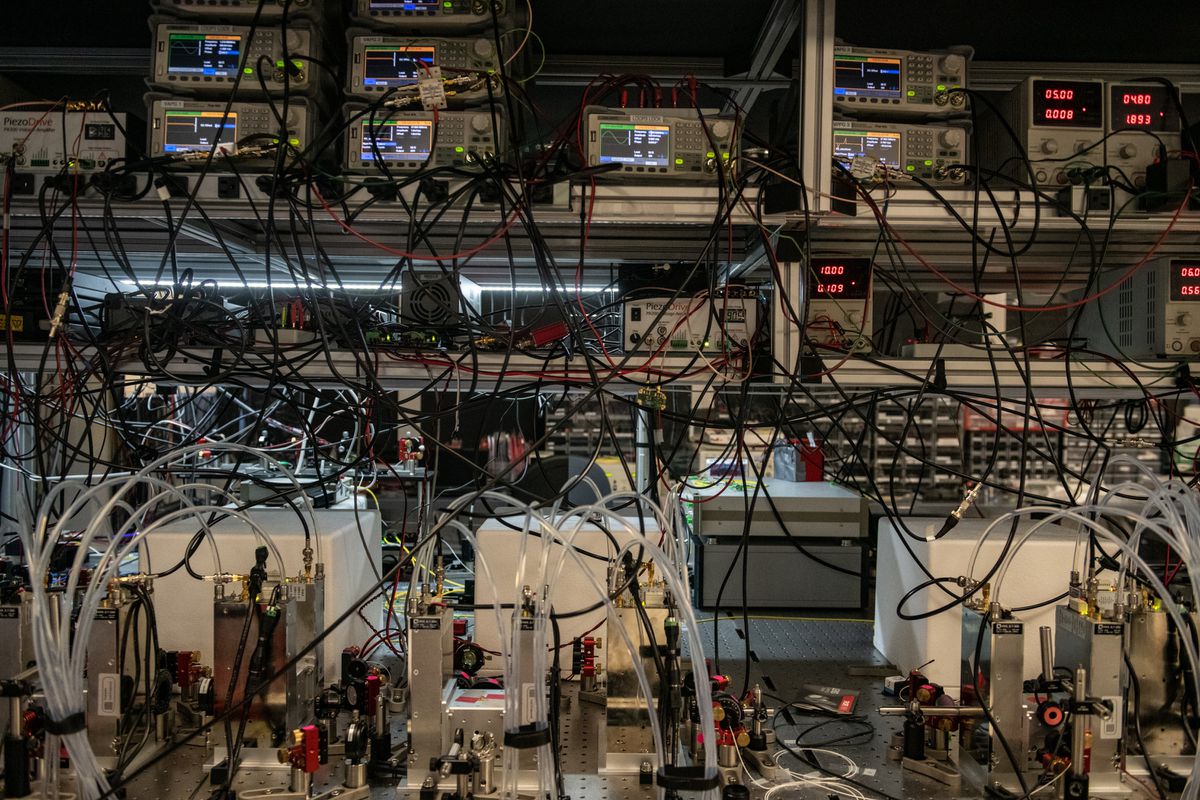 Xanadu Quantum Technologies, one of many companies trying to harness the ephemeral nature of quantum physics to revolutionize the computing industry, has reached an elusive milestone with a device capable of outperforming any supercomputer in the world at one task. specific.

In an article published Wednesday in the journal Research Naturethe Canadian company described how its machine, a quantum computer dubbed Borealis, achieved a “quantum advantage” – a term that means it delivered a result beyond the practical reach of a conventional computing system.

Specifically, Borealis delivered a series of numbers with a specified probability range in just 36 millionths of a second, an operation that would take the world’s most powerful supercomputers more than 9,000 years. The exploit has no immediate application, but Xanadu scientists had to overcome several key challenges to accomplish it.

“That’s what we think is really great about it,” Xanadu founder and CEO Christian Weedbrook said in an interview at the company’s headquarters, where Borealis sits on the 29th floor of a office building overlooking downtown Toronto. “A lot of these breakthroughs are what we need to come up with a quantum computer that’s useful to customers.”

He said the achievement “plants the Canadian flag” in the race to develop what is called a universal quantum computer – a system that can, in the future, be used to break down computing barriers in areas as diverse as cybersecurity, drug discovery, materials science, financial risk modeling and climate change mitigation.

The company also invited external users – from expert researchers to the simply curious – to test Borealis on the Internet.

As in previous cases in which the quantum advantage has been demonstrated, clever use of conventional computers may emerge that can mimic the quantum system – a tactic known in the field as spoofing.

Even so, said Barry Sanders, director of the University of Calgary’s Institute for Quantum Science and Technology, what matters most about what Xanadu has done is that it reinforces the idea that the industry is on the way to universal quantum computing.

“It’s not a minor step, it’s a big step forward,” said Dr. Sanders, who is not affiliated with Xanadu.

To the untrained eye, Borealis looks more like a science experiment than a computer. It is made up of fiber optics, mirrors, and other light-guiding components spread across a table, with supporting electronics on shelves above. Its operating elements are pulses of compressed light – infrared laser light that has been manipulated to exhibit certain quantum properties.

As the pulses pass through the system, some are sent down long looping paths which, at three points, allow them to double up and interact with the pulses that follow them. These increasingly entangled pulses act like the qubits of the system – analogous to the 1s and 0s in a conventional computer, but more versatile because the quantum strangeness allows them to contain a mix of values ​​that collectively solve the task.

The so-called photonic approach has the advantage of being able to operate at room temperature. A disadvantage is that some light is inevitably lost as it passes through the optical hardware. But other types of quantum computers have their own trade-offs.

The first system to demonstrate the quantum advantage, unveiled by Google in 2019, used cryogenically cooled superconducting circuits as qubits. A year later, researchers from the University of Science and Technology of China claimed a quantum advantage with a light-based system. Neither has crossed the 100-qubit threshold.

By contrast, Borealis is a 216-qubit device with features that its designers say will make it easier for them to scale. (Another Canadian company, D-Wave Systems Inc., has reached the thousand-qubit level with a non-universal form of quantum computing applicable to a smaller class of problems.)

Experts estimate that it will take at least a million qubits to make a commercially relevant quantum computer. Indeed, most of these qubits will be needed to correct errors that creep into any quantum system. Like previous systems that have shown a quantum advantage, Borealis does not include error correction in its design, a hurdle the field has yet to overcome.

Jonathan Lavoie, who led the development of Borealis for Xanadu, said the system was designed and assembled during the height of the COVID-19 pandemic, with team members working together online to define the details of its functioning.

Margaret Wu, one of Georgian’s lead investors, said Xanadu “has been incredibly capital efficient” and has made greater progress after raising and spending less money than its quantum computing rivals. She said Xanadu has continued to exceed internal expectations and “they’re more advanced than we expected when we initially invested, and they’ve done it while saving money” during the pandemic.

“It’s remarkable that they were able to stay on track and continue to stay ahead of many other approaches,” Ms Wu said.

As quantum technology has advanced, investor interest has also increased, although the industry is still far from delivering a commercially relevant device. Research firm Gartner has predicted that nearly 40% of large companies will pursue quantum initiatives by 2025.

“This is the commercialization of a branch of physics that will eventually completely redefine everything, but it will take time,” said Stephanie Simmons, founder and quantum chief executive officer of quantum technology company Photonic Inc. based in Coquitlam, British Columbia.

For now, the industry is in what Gartner analyst Chirag Dekate described as an embryonic state at best.

Several quantum computer developers, including Xanadu, have customers and research partners that include giants such as Volkswagen AG and Amazon.co.uk Inc., but most of the work of these developers is experimental and exploratory.

“The technology is not at the point where you have concrete business value, concrete practical implication,” said Dr Arne-Christian Voigt, head of Volkswagen’s advanced technology and innovation group, who led research projects using quantum machines from Xanadu. , D-Wave Systems, Google and IonQ Inc.

Dr Voigt called the Xanadu achievement “not very significant for photonic quantum computing”, but he said “it’s an open question” whether a quantum computer can live up to the hype. “At the moment it’s open what kind of technology will race later.”