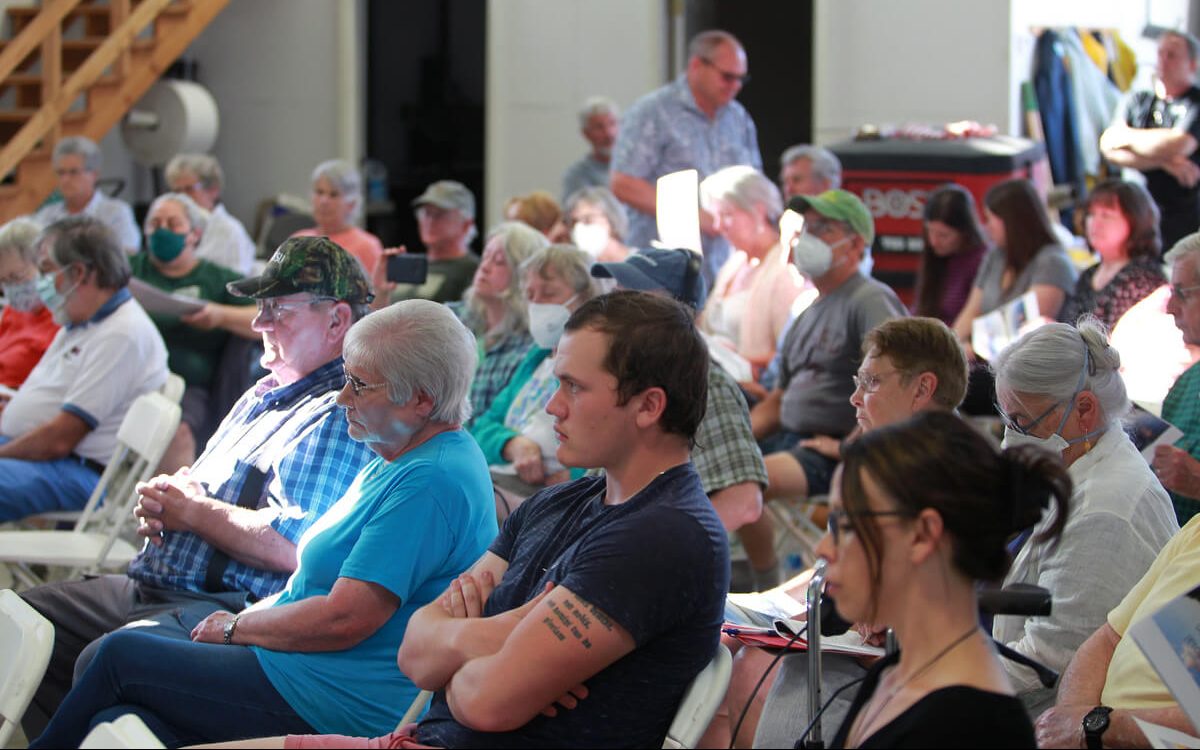 Wolfden Resources wants to use the ordinances as proof of local support when applying for a state permit to mine metallic minerals.

Wolfden Resources, an Ontario-based investment group, wants to build a mine on 600 acres in northern Penobscot County, near the Aroostook County border and the Katahdin Woods and Waters National Monument. The company promises 300 or more jobs in a rural area where employment can be scarce, but environmentalists fear the company’s sewage treatment plan is not enough to protect wildlife and fisheries. The project is the first real test of Maine’s strict mining law.

A group of about 55 Patten-area residents gathered at the town garage Wednesday night to hear Wolfden’s presentations, as well as opposition from the Maine Natural Resources Council. A similar meeting took place in Hersey in mid-June. Moro Plantation is also nearby. The Patten Board of Selectmen took no action following the presentation.

The company was seeking public support for the mining project before investing between $10 million and $15 million in additional studies and research, including on the impact on soil and water qualities and on fisheries and wildlife, Jeremy Ouellette, vice president of project development for Wolfden Resources, said at the meeting.

Maine’s mining regulations are among the strictest in the world and his company would do everything possible to meet those standards, Ouellette said.

“Wolfden is able and ready to follow these regulations,” he said. “By doing this, Patten, and Maine in general, can be the shining star of the mining industry.”

Ouellette said the project would create over 300 jobs for the local economy, which was good news for many in the audience, as well as the Board of Selectmen.

The project has faced stiff opposition from environmentalists, particularly the Maine Natural Resources Council. Nick Bennett, an NRCM scientist who focuses on water quality, said he was very concerned about Wolfden’s ability to meet the stringent water treatment and discharge standards that come with the extraction of precious metals from the ground.

Bennett said Wolfden has yet to provide an example of a mine in the world capable of treating water to the level required by Maine’s strict laws, nor has it proven that its own system will work effectively.

Wolfden’s plans to contain and store the tailings include finding a 50-acre plot of land and then stockpiling the “tailings” – a by-product of mining consisting of the leftover treated rock or soil. of the separation of valuable minerals – into multiple layers, each protected by a barrier to prevent seepage into the ground, Ouellette said.

This pile, which could be over 22 feet high, would be covered with soil and planted with grass and other vegetation when mining is complete.

Before Wolfden can make any progress, he must resubmit his rezoning application to the Planning Commission for review. Mining is not a permitted use in the area, including Pickett Mountain, so the commission should rezoning to permit it.

The company submitted a revised application to the commission in September 2021, but voluntarily withdrew it when it learned that LUPC planned to deny it because Wolfden had to prove that its wastewater treatment plan would work.

If the rezoning is successful, the company will apply for a permit from the Maine Department of Environmental Protection to operate the mine. The authorization process could take several years.

Feelings were mixed at Wednesday’s meeting. Some people in the audience, as well as members of the Patten Board of Selectmen, hailed the economic opportunities the mine would bring.

“People are trying to pay their taxes and find jobs,” Selectman Rebecca Phillips said. “We are a very low to moderate income community. If we don’t bring industry, we’ll die on the vine. I don’t want anything dangerous for my grandchildren, but there may be no more children here because there is no industry.

Opponents feared that such a move would forever damage the pristine nature of the region, especially since so much effort has gone into making the Katahdin Woods and Waters National Monument a tourist attraction.