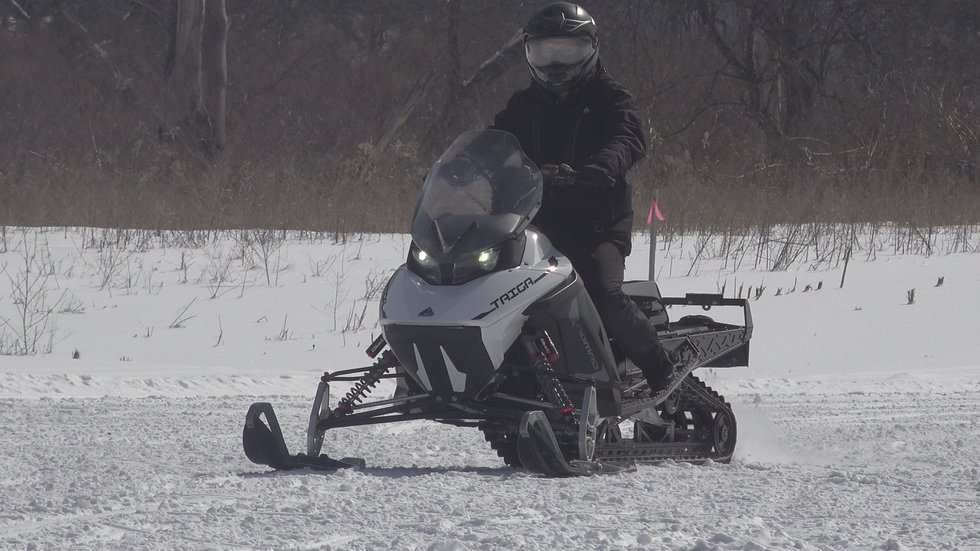 Electric snowmobiles run on batteries rather than gasoline, which means they are much quieter.

“For snowmobilers, this is definitely a great option for us,” said Cindy Locke of the Vermont Association of Snow Travelers, or VAST.

“If they go ahead with some of my budget proposals, that will include incentives for snowmobiles and e-bikes, anything electric from an e-entertainment perspective, so it’s important that we embrace that from holistic way,” Scott said.

Scott also says he would eventually like state offices that rely on snowmobiles to make the switch as well, such as the Department of Fish and Wildlife.

Taiga’s Sam Bruneau says you could use a home charger, but the company also hopes to install 1,100 Tier 2 and Tier 3 public charging sites nationwide by 2025.

“We are building beyond where the road ends today to allow people to travel Vermont’s most popular routes across other states and into Canada in the most remote places where automakers wouldn’t install chargers for vehicles,” Bruneau said.

Taiga’s website says its electric snowmobiles can travel up to 62 miles on a single charge.

“I think that’s definitely something a lot of rental and tour companies and ski resorts and even your local farmer will start looking at,” said Steve Torrey of Snowmobile Vermont.

The state says the goal is to help make recreation a little greener. Some Morrisville snowmobilers say they aren’t ready to buy one just yet, and for now they’re sticking to what they know.

“I like what I’m riding now. I’ve been riding since 1968,” said Bill Barry of Waterville.

Others say they would worry about running out of charge and getting stuck.

Topsham “We travel a few hundred miles a day on our sleds. You won’t get that on an electric snowmobile,” said Topsham’s John Hughes.

“Maybe if you were in Yellowstone Park on a tour and you got in line and left, that might be fine, but for the average person, no,” another snowmobiler added.

The Vermont Association of Snow Travelers says it expects the shift from gas to electric to take some time.

“I think it’s going to be like electric cars. It will be a progressive thing,” Locke said. “We just see it as an alternative and something new and something to move towards.”

Electric snowmobiles cost about $2,000 to $4,000 more than their comparable gas-powered counterpart, but Taiga says the money you save on gas will make the purchase worthwhile.

Five things to watch out for in Canadian business | Business