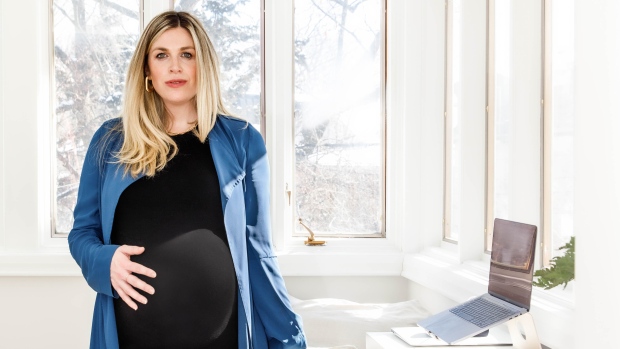 TORONTO — A Toronto CEO raised $53 million in capital while pregnant with twins, while refusing to work with investors who would question her pregnancy.

After sharing her story, Joanna Griffiths told CTVNews.ca that the response from other women entrepreneurs has been “overwhelming.” Her posts on Instagram and LinkedIn detailing her experience have received thousands of likes.

“I can’t follow at this point with so many people reaching out and just saying how important it was for them to see this story,” Griffiths told CTVNews.ca in a phone interview.

Griffiths’ business Knix Clothing, a women’s underwear brand, has seen its online sales skyrocket during the pandemic, surpassing $100 million in revenue in the past 12 months. As a result, she and her team decided the time was right to expand the business and bring in outside capital.

Griffiths launched Knix in 2013, first developing period-proof underwear, but slowly expanded into other protections in the lingerie category, while challenging conventional notions of attractiveness worn by traditional industry players like Victoria’s Secret.

“There was a very singular vision of what was sexy and what was attractive and it was a vision that not many people could relate to. So our North Star at Knix has always been about reinventing products, and then to redefine what a brand can fall into that category and how we communicate with our customers,” Griffiths said.

Given these values, it was important for Griffiths to draw that line in the sand, refusing to work with investors who allegedly made negative and derogatory comments about her pregnancy at the time, no matter how much they offered. .

“Knix, at its core, is so rooted in female empowerment,” Griffiths said. “My perspective was that if that was how they felt about me then they were never going to understand what Knix was and what we were trying to accomplish and they were definitely not going to be the right partners. for me. “

Griffiths continued, “When you’re fundraising, any amount of money, you know, whether it’s $50,000 or $50 million. There’s a power dynamic around money, and I think that often makes people asking for it feel helpless, and so in standing up for myself, I was reminded of that.”

Knix ended up working with TZP Group, a New York-based private equity firm, and closed the funding round on March 5, three days before the birth of his twins, all on schedule.

“I just knew I wanted to (raise money) before I gave birth because I wanted to pour all the extra energy I had after the birth (toward) my business and my team,” Griffiths said.

“I’m really excited to build on this growth momentum and continue to grow the business,” Griffiths said.