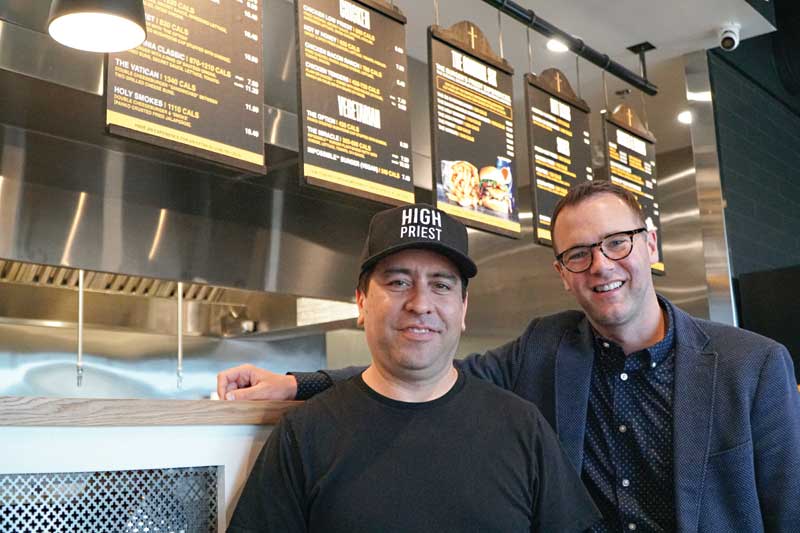 Hearing the backstory of The Burger’s Priest, the old saying, “If you want something done right, you have to do it yourself,” will probably come to mind.

This reasoning inspired the company’s founder, Shant Mardirosian, a California native who grew up with a love for a classic, fresh, handmade burger.

Years later, while attending a seminary in Toronto in hopes of becoming a priest, Mardirosian found himself in a crisis of faith. Not in a religious sense, but in his faith in the burger world.

According to him, what he loved growing up had been replaced by frozen patties, cooked quickly without any sense of pride or passion.

After traveling to New York for inspiration in smash burgers, he returned to Toronto and opened the first Burger’s Priest location in the city’s east end Beaches neighborhood. According to company president Ryan Bullock, that first location was just 33 m² (350 square feet), with just four bar stools for customers to use and a menu taped to an old hymn board.

The concept began to create a buzz within Toronto’s independent and alternative communities, and that buzz turned into solid business as the company nearly tripled its revenue year-over-year.

Bullock explains that the branding of The Burger’s Priest was not a “trick or a joke about religion”.

” The notion of [Mardirosian] being a “burger priest” was nothing new. He was basically buying out for the other burger restaurants,” says Bullock.

To reiterate the inclusion of Mardirosian faith and tradition in the business, Bullock points out that the first location was originally closed on Sundays and only available in cash.

Over the next decade, The Burger’s Priest grew from a local sensation to a legitimate brand, with over 25 locations in the Greater Toronto Area, Ottawa and Edmonton.

About a year ago, the company was acquired by Recipe Unlimited, whose restaurant resumes include Swiss Chalet, Harvey’s and The Keg. With this deal in place, the brand set its sights on the world of franchising by opening its first franchise store in Pickering, Ontario in late April.

The honor of being the company’s first franchisee went to Pickering resident Gus Romani. However, Romani is no stranger to the franchise or The Burger’s Priest itself.

Even in his youth, Romani realized that he didn’t like taking orders from someone else.

“I wanted to do something for myself. I didn’t want people to impose constraints on me, like being there at a certain time,” he says.

Romani has owned multiple franchises throughout his career, and about five years ago decided he needed, and didn’t want, to do the same with The Burger’s Priest.

“I was a regular customer at Burger’s Priest. I loved walking around the place – the vibe was so cool. The people working there always seemed like they were having fun, and my next company was going to be one I was proud of and always loved getting into, so that was perfect,” he says.

However, at that time, Romani says the company wasn’t quite ready to go into franchising, so he worked with them in another capacity. Finally, the time had come.

“After years and years of perseverance and listening, they had finally come to this point and they decided to give me a store,” Romani says. Canadian commercial franchise.

Romani says the process has been almost without challenges so far, which he credits to the team behind the scenes.

“One of the things I like to hear from head office is, ‘We’ll never be the biggest, but we’ll be the best.’ I love it, and I think the team has shown it to me time and time again: they are open to improvement,” he says.

Bullock is quick to pay tribute to Romani, noting that he grants The Burger’s Priest “local loyalty” as well as customer loyalty to the brand. In fact, he called it “the perfect example” of what they look for in franchisees.

“Everyone who works in our system, new or old, is already a fan of it. So we’re looking for franchisees who believe in the brand, but also who will work a shift and be involved and have at least some experience in the restaurant industry,” says Bullock. “The brand grows as the franchisee grows. We want franchisees who act like us. Some big brands operate where their group of franchisees is like a brotherhood or a sisterhood – that’s what we look for.

Although the company’s history is unique, Bullock says there’s more than that that separates them from the competition.

“We’re obsessed with quality, it’s what we were founded on. We never sacrifice it,” he says. “We take a little longer than most mass channels, but it’s worth the wait.”

Bullock says the company also sets itself apart by creating a culture of originality.

“Our staff can be themselves. We don’t have uniforms. We’re lucky to have people who are unique individuals, and we really encourage individuality,” he says. “We hire people,
not employees.

Looking ahead, Bullock says The Burger’s Priest aspires to rapid, but controlled, growth across Canada. He quoted Mardirosian as saying, “We want to build one store at a time.”

Brand locations are currently in the Greater Toronto Area, Ottawa and Edmonton. Bullock says the immediate goal is to expand further in those regions, with a long-term plan to open restaurants in British Columbia, Quebec, Saskatchewan and the Maritimes.

This anticipated growth is something Romani is looking forward to being a part of.

“I want to grow with this company. It’s the brand I want to work with, and I’m really interested in opening more units,” he says.