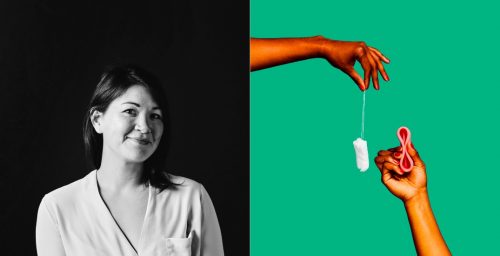 A Canadian menstrual cup company is on a mission to change the way we live and talk about periods and menstrual health.

Periods, notoriously considered disgusting and embarrassing, are becoming more common conversation, and nixit is at the forefront. They want to change the way periods and menstrual health are viewed to eliminate stigma and educate along the way.

“Our mission isn’t just to sell nixit to people, it’s to educate them about menstrual health and empower them to make the right choice of menstrual products that are right for their bodies,” said the founder of nixit, Rachael Newton, at Daily Hive.

If you follow nixit on social media, you might be used to vaginal designs appearing in your feed, or discussions about pleasure, menstrual flow, and how to use their version of the menstrual cup. If you don’t follow them but have questions about rules, fun, dating, etc., they might have the answer for you.

TikTok has become a space where nixit helps educate and increase brand awareness. They have videos on the clitoris, vulva, how to insert the nixit menstrual cup and more. A sort of one-stop-shop for all your questions about menstrual health.

In order to educate, Newton knows they must talk about everything.

Think about it, if you’ve ever had your period, how many times have you wondered if something was normal, but maybe were too embarrassed to ask a friend? Well, enter nixit.

“We can only do that by talking about all the different things that are associated with periods: heavy clots, different colored blood, all the different products available, the benefits of each, maybe also some of their downsides,” she said.

These videos aren’t your mom’s tampon commercials (or yours if you’re a fellow millennial). There’s no blue liquid, no one riding a horse or shyly sneaking into the bathroom with a tampon. They opted for realism, using red liquids, realistic diagrams and not a single horse.

“We try to show the periods realistically. When I got my period it was kind of awful in the sense that there was so much blood and I didn’t expect it,” Newton said.

Unsurprisingly, they have become a resource for young menstruators and for those who have had their period for years and still have questions. In a way, they have created an online community for menstruators around the world.

“It’s a place where they can safely come and talk about their periods, what they’re going through and can answer each other’s questions. There’s a sense of community that I think is really important,” Newton said.

Newton said promoting menstrual health was so important to her and nixit because of the widespread stigma associated with menstruation. It is also a tool that menstruators can use to defend themselves. It’s incredibly difficult to deal with menstrual health issues if everyone’s menstruating in secret and there’s no idea what might be considered cause for concern.

Their videos are garnering thousands of views, whether they’re answering rules questions or comparing nixit to other vintage products, they’ve certainly sparked a conversation.

If you haven’t yet ventured into the menstrual cup game, you’re probably wondering how you could use one. Especially nixit, which doesn’t look like the vast majority of menstrual cups. Designed as a disc, it looks a little intimidating. Don’t worry, nixit has a TikTok for that.

“It’s a great way to let people visualize how to insert it, where it is, how to clean it, all those sorts of things,” Newton said.

Although the response to their videos has been mostly positive, they still receive feedback that comes from a place where belief periods are crude. That’s why Newton does what she does, she wants people to feel empowered, not gross.

“It’s our job to show people that it’s not gross and why it isn’t,” she said. “I think there’s something so empowering about using a cup and understanding your flow, touching it and seeing it, versus taking your tampon out and never knowing what’s going on.”

Even speaking from more personal experience, as a nixit user myself, I learned a lot more about my period health. Simple things like cycle tracking and knowing when your days are busy can really make your life easier. It was also a key factor in tracking my menstrual health. Using nixit put me in touch with my menstrual cycle in a way that I have never experienced with other menstrual products.

Newton said she gets a lot of comments similar to mine, that if only we had all known this when we were teenagers, puberty might have been a little less awful.

It’s not only good for menstrual health, using a reusable menstrual product reduces the amount of waste you pour into landfills each year. Newton said tampon users will use about 11,000 tampons in their lifetime, all of which end up in a landfill. Switching to a reusable cup will significantly reduce this number.

“You’ll reduce your menstrual waste by 99%, which is pretty amazing,” she said.

As nixit nears its third anniversary, Newton reflects on the company’s goals and how far it’s come since 2019.

“Our goal was to make menstrual cups mainstream, and I feel like we’ve done that for the past three years,” she said.

If you’re considering making the switch, don’t be put off by small leaks or difficulty inserting it the first time. Like most things in life, there’s a learning curve, but nixit has TikToks for that, too. Not to mention that you can email them directly and they can provide you with tips and tricks on how to do it right.

The Instruction guide on the nixit website provides realistic goals, tells users how to prepare for those first two months of learning to use the cup, and offers troubleshooting solutions for those who might need them.